Hey guys, Jonathan here with my first monthly update of my BTC robot’s performance at Aggressive setting. Note that I will be using Aggressive for all my future monthly updates from now on. The next update would be on 30th Nov 2013.

What I DID for this month?

I have changed my mode setting from Medium Risk to Aggressive on 19 Oct 2013, at 7.10 pm (GMT + 8) because I realized that the robot is not performing to my expectation after running it on Medium Risk for close to 2 months.

This is further confirmed by the BTC Robot development team who mentioned that the best performing robot that they have on different accounts is on Aggressive mode.

Here is the email proof:

Now moving on to my robot’s performance for the month of Oct 2013: 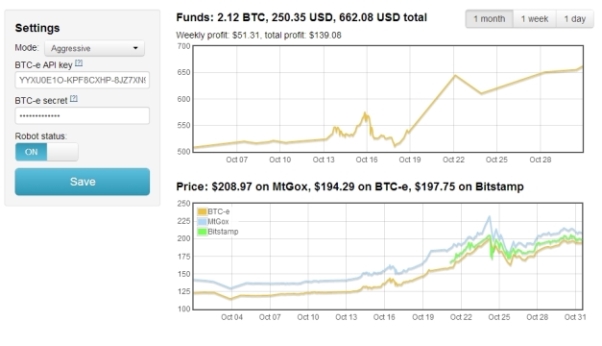 For this month, I made a total profit of US$139.08 after changing the mode setting from Medium Risk to Aggressive. I could have made even more money if I changed the setting earlier on. 🙁 Anyway, I am still very satisfied with the performance since it is still within the BTC robot development team’s prediction of 5% to 100% monthly return.

In fact, based on my observations, the robot is now capable of making money even in downtrends too. As you can see from my profit graph, when the price of bitcoin (at BTC-e) dived again from US$200 to about US$160 or US$165, my profit did dwindle a bit.

However, when it rebounded back from the low price to close to US$200, my profit margin is much more than the previous high which I achieved when the price hit US$200. This comes to show that the BTC robot is becoming smarter. 🙂

I will not be showing you my trade history because there will be too many images. Anyway, based on my trade history, the number of trades for Medium Risk has increased by leaps and bounds ever since update 1.1 was released on 8 Oct 2013. This has resulted too many transactions in a day which may have costed me a fortune in terms of the transaction fees that I need to pay.

Upon a closer look, Aggressive mode is still doing fine as there are only a couple of trades per day which in general, are profitable according to market conditions.

So what’s coming up next month?

I have decided to do an opportunity cost case study based on the following 4 scenarios:

1. Use BTC robot to trade

2. Buy bitcoins and held them

3. Buy bitcoins at BTC-e and sell them on Mt. Gox

4. Left the money in the bank

Which method do you think is the best? Feel free to add to the discussion of my case study at the following link: http://bitcoinworldwide.net/case-study

I would love to hear from you!

To your bitcoin trading success!